FNAF is a classic horror game series. In this game, you are offered to play for an average security guard who was hired to supervise a pizza cafe for children. This place is full of creepy mechanical animals called animatronics. Be attentive to keep them away from yourself! Five Nights at Freddy’s 2 downloading is available for PC on Steam. 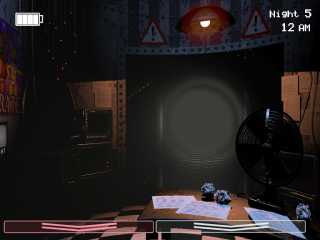 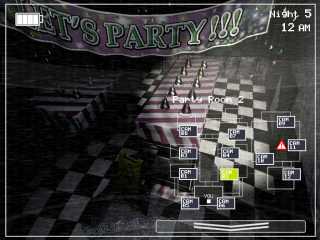 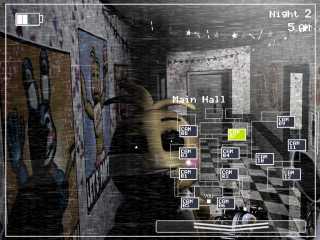 As in the first chapter of the series, you have to play for a safety guard who is hired to look after a pizza cafe with animatronics for five nights. Each night you have to sit in a security observation room and stare at monitors of multiple surveillance cameras.

Animatronics are everywhere, and that is the problem. Unlike the first chapter, you won’t be able to memorize the location of every mechanical monster. Every switch between cameras may become lethal. You have to keep animatronics away from yourself to stay alive. The only way to do that is watching into the right direction to be aware of their presence.

In original Five Nights at Freddy’ it was possible to close the door to the security room, but developers deleted this option in a sequel. At this chapter, you have to use Freddy Fazbear’s mask to pretend that you are one of these horrible creatures and it’s the only way! It becomes even more frightening when you find that this method is not always effective …

Five Nights at Freddy’s is rather cartoonish. The image is not of a high quality, but it’s extremely authentic and relevant. Designers of this title invented a perfect look for a cross-platform horror, and it doesn’t need any improvements. The biggest part of gameplay lasts in camera mode that looks exactly like old surveillance cameras image. Cameras move very slow and make a very treacherous loud engine sound.

The atmosphere of terror is greatly supported with quality ambient sound effects that accompany you, and sometimes make you twitch from nothing.

Five Nights at Freddy’s 2 is a short gaming experience. You have to survive 5 levels only, but don’t be upset when you do this for the first time. FNAF still has a lot of things in reserve to scare you. In fact, it’s worth to be replayed for at least 3 times, because you never know where the new creeper comes out. It’s a Five Nights at Freddy’s 2 review, but it’s recommended to play all chapters one by one as they are short and similarly scary.

This game is controlled with a PC mouse only. Controls are quite intuitive, but you have to train a little bit to avoid making mistakes on harder levels. Sometimes it becomes extremely overwhelming to click the right item in time. Mouse controls here are up to place, because they keep you from pressing buttons accidentally.

Five Nights at Freddy’s is a paid game that doesn’t offer any in-game purchases. Keep in mind that you can buy all chapters of the series for a very low price instead of purchasing them separately.

FNAF 2 is a fine chapter of the famous horror franchise by Scott Cawthon. It’s certainly worth the attention of anyone who enjoyed the first chapter. Try to fool animatronics to see the light of the morning. A huge load of classic fear is guaranteed!

Good horror games are extremely rare and FNAF is definitely one of them. Download Five Nights at Freddy’s to have a couple of stressful hours in front of your PC screen!.

Cons : It’s a short game;
Purchasing a single chapter you spend too much money.

There's not a lot of questions about Five Nights at Freddy's 2. Ask insistently in the comments so you can make it frequent!
Yup, take me to comments

One of the most trending games right now!
You just can't miss this game!

Welcome to your new summer job at Freddy Fazb...