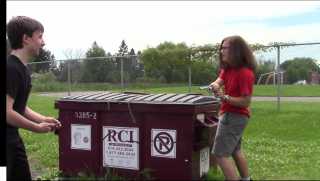 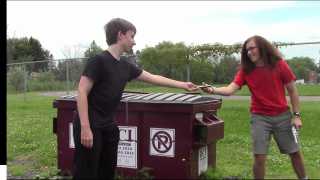 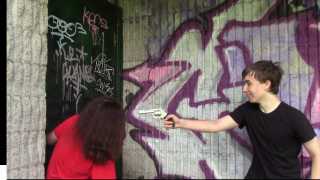 The intro is pretty weird and may remind you of the school projects we used to do back in high school. There are two guys just playing around with the guns… and that’s it. It shows you a short video clip and then prompts you with 2 or 3 choices. You’re going to play as Jack Turner or John Johnson. You can operate Jack on his way to find the password to the computer. Each chapter ends with a funny and kind of weird storyline.

Throughout the game, you have to make a choice. For example, decide to kill the casual player, or forgive him. There is no real action, the game is designed more for fun. You may not even notice that you’re playing during the live stream.

Zombitatos the End of The PC Master Race is an FMV game first of all, so it strongly relies upon in-game video files that were pre-recorded. The chapter menu page can get annoying with so much typing required from the player. The song in the intro is pretty catchy though, and you may actually end up singing it in the shower.

It is amusing seeing two kids messing around. But that’s definitely not enough for the game that you have to purchase, right? The game is way too short, being approximately 10 minutes long if you make everything right The description to this game claims you’ll have lots of puzzles to entertain the brain and get smarter… Well, if they say so. Besides, three times intro replay can get annoying.

There is no point to even start talking about controls, as the game is all about watching videos and cutscenes, with occasional clicking to make the right/wrong choice that will lead you somewhere so you might feel like a participator of the story.

So, there is no control set then. Just your mouse, which is convenient and easy.

There are no in-game purchases because there is no actual gameplay. Maybe, devs will improve it one day, so that if you’re not satisfied with your character’s performance, you could buy some items to make it even weirder.

Zombitatos the End of The PC Master Race is more based on cutscenes rather than the gameplay itself. Not bad for the first development try, but it definitely lacks high production value, and looks more like a school project than a real game.

Download Zombitatos the end of the Pc master race for $0.79 if you want to give young developers a chance to improve their work!.

Zombitatos the end of the Pc master race FAQ

There's not a lot of questions about Zombitatos the end of the Pc master race. Ask insistently in the comments so you can make it frequent!
Yup, take me to comments

Call of Duty delivers the gritty realism and...