Super Mr. Kake is a unique cartoonish fighting video game, developed by Five-entertainment and inspired by The Ren & Stimpy Show. The story is about a retarded Superhero that is now dedicated to creating wedding and birthday cakes. You can download Super Mr. Kake for Vista/XP if you have 4 and more GB of available space.

The story begins when someone steals the most delicious cake Mr. Kake ever made, he decides to find the thief and demand revenge. He puts on his legendary cap and goes searching for his enemy. He only wants revenge and his cake back, surely.

When he finds the thief, there is a great fight coming next. 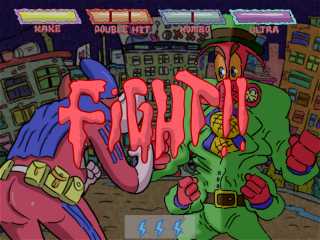 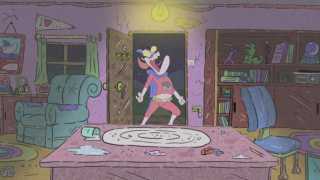 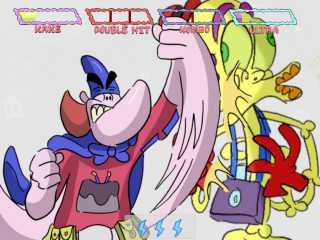 Super Mr. Kake is rather difficult and fast-paced fighting game. Throughout the game, you learn how to dodge, block and attack your enemy. Foes will get progressively stronger as you advance through the game, forcing you to learn more tricks and adapt to their behaviour. Sometimes you need to smash your enemy as much as possible so he hasn’t much time to cover up and fight back.

The gameplay is also difficult because each enemy has one unblockable attack. So you have kicked them before they land you those punches.

Before each level, a list of tips appear. They give you a piece of advice on how to stay alive longer: “Do not hit the enemy while they try to hit you with an attack that you can block or evade, or they will counter your attack”.

Developers have given Mr. Super Kake a stylized, colourful and cartoon-like graphical style. They were inspired by The Ren & Stimpy Show. The style of the game emphasizes unique expressions and strong character poses. One of the most recognizable visual trademarks in Mr. Super Kake is the detailed paintings of gruesome close-ups.

The game can get extremely addictive if you are fond of fighting games. If so, you’re probably going to improve your skills level by level. However, the difficulty of the whole action along with uneasy control set can irritate you once and force to give up.

The command list is slightly hard to remember. The flashing of the letters makes you dizzy and hard to concentrate. There are many chances you will get tired quickly and skip this step. Covering and dodging buttons can seize up and force you to die.

There is a lot of action in this game, so it would be better to use a controller. The game needs the controller support because doing all the action on two sides of the keyboard is extremely uncomfortable. No one likes playing like that.

There is no in-game purchases or subscriptions. The game costs $4.99 and that’s it. No fees to improve a character or enhance the playing experience, which is great, surely.

The art style of the game is absolutely brilliant. The detailed close paintings of some nasty scenes and those blotchy ink stains that occasionally replace the standard backgrounds remind you of The Ren & Stimpy Show. However, the gameplay is pretty difficult and the control scheme leaves a room for improvements.

We’d recommend you to download Super Mr. Kake and try your hand in this unique fighting game..

Cons : A slightly dumb set of controls;
Difficult for beginners in fighting.

There's not a lot of questions about Super Mr. Kake. Ask insistently in the comments so you can make it frequent!
Yup, take me to comments