Square Head Zombies is a game with a rather low graphics and many levels. It is a classic pixelated First Person Shooter, where you will be backed into a corner, surrounded by the recently dead. You can download Square Head Zombies for $4.99 and have a lot of fun shooting zombies.

The action in game is tense. At each level, there is a certain number of undead appearing. All they want to hunt you and kill you. The trick is to prevent zombies from attacking you and shoot them separately before they get you. As the game proceeds, you learn new tricks to master your shooting skills.

An interesting fact: developers of Square Head Zombies actually ask people what they want and improve themselves, which is extremely rare. 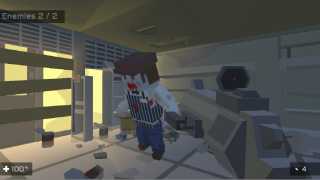 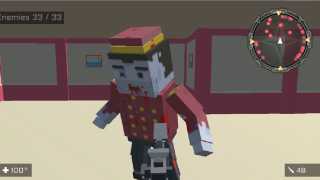 In this FPS game, you are responsible for surviving in an apocalyptic world infested with zombies. You have nothing but your gun to kill the beasts. After each 5 levels completed, one weapon is unlocked.

In Square Head Zombies, reloading your weapon in time before zombie reaches you means everything. Your enemies are very strong, three to four usually kill you quickly at each level. If a zombie spots you, you run for your life and then go attacking. You fight with enemies in the big city, beaches, farms, offices.

The downside of the gameplay is that every other level the number of killed zombies gets messed up and you have to quit the game to fix that. It is annoying seeing the counter go from 10 back to 0 for no reason. There is no multiplayer option either.

The graphics in Square Head Zombies is low which makes the environment look blurry. It is played smooth, but the colours and graphics are just whacked. In addition, the music is too loud.

On each level, there’s a specific number of zombies to be killed. After a lot of practice, you realize that killing undeads separately is easier. As your skills improving, you may get involved deeper and even get addicted to some extent, as you have to survive at any cost.

Controls leave considerable room for improvement.  For some of the movements you need to enable the developer console. For other actions as reported by players, you have to make some operations with the files from the game folder.

There is no in-game purchases. All content is fully playable without spending money. However, as the game’s receiving a new update and going to the final version (release date: 22 March, 2018), the game price increases.

Have you always been a fan of the zombie apocalypse? Well, then this is the right game for you. There is just one thing: you have to accept no improvements in the graphics and no multiplayer option. Simple as it is, Square Head Zombies can become your next time eater.

You are welcomed to download Square Head Zombies and start playing quickly. You will only need Windows 7 or above and 300 MB available space for a full-scale apocalypse..

Pros : Many levels;
An array of weapons;
Tense action.

There's not a lot of questions about Square Head Zombies - FPS Game. Ask insistently in the comments so you can make it frequent!
Yup, take me to comments

Everyone enjoy playing this game
You just can't miss this game!
One of the best action games ever!