Sonic Mania is a new release of the popular franchise in the adventure genre where you meet new powerful bosses to battle against. If you are a Sonic fan or even if you have not heard about it before, download Sonic Mania and enjoy this perfect sequel. 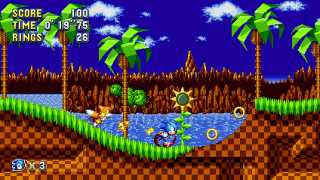 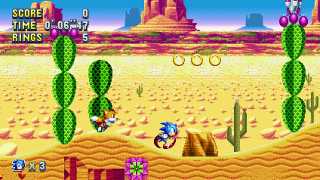 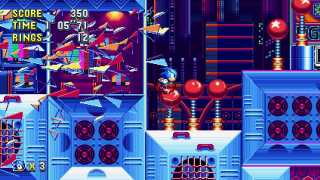 This game looks like an old school platformer with fun classic gameplay. At every stage, you will move forward from left to right. This simple progression is complicated with various obstacles to jump over and collectibles to pick up. If you succeed, you will unlock a bonus stage. Still, you will move without objectives. Just do it to get a higher score. You will be given a lot of lives from the very beginning and tons of chances to gain even more while playing. Your principal tasks are to collect rings, reveal secrets, and fight against bosses. You can apply a cooperative or competitive multiplayer option.

The animated pixel graphics are well-done with plenty of unique characters, picturesque 2D landscapes, and nice soundtracks. The fantastic level design will make playing full of fun and looks like the previous release a lot.

Sonic Mania is divided into twelve zones, every of which is divided into a couple of acts with unique boss fighting. Also, it is packed with lots of modes including multiplayer, collectibles, routes, unlockables, and even bonus stages. All those things allow playing the title for a long time and with great pleasure. It is not for free but the price is quite affordable so that you can enjoy the deep gameplay and agree that this Sonic Mania review is so on the target recommending the game.

The control scheme does not differ a lot from the original title. You are suggested to use the directional buttons to explore the environment. The key character can jump when you clock on the corresponding button. If you click twice, the character will fly.

There are no in-game purchases.

Get ready to run and jump, fight, and pick up. The speed does matter. There are lots of lives that are why you will easily play for a long time to reveal all secrets you find on your way. Download Sonic Mania and enjoy this perfectly-designed title.

This is a remarkable remix of other Sonic games with a lot of funny details..

Pros : The pixel graphics are smooth;
The game offers an unforgettable soundtrack;
The gameplay is full of challenges and things to do.

Cons : It is not free;
The sound and video settings cannot be changed during playing.

There's not a lot of questions about Sonic Mania. Ask insistently in the comments so you can make it frequent!
Yup, take me to comments

Everyone recommends to play it!
You just can't miss this game!
One of the best action games ever!

© SEGA. SEGA, the SEGA logo and SONIC MANIA are either registered trademarks or trademarks of SEGA Holdings Co., Ltd. or its affiliates. All rights reserved. SEGA is registered in the U.S. Patent and Trademark Office. All other trademarks, logos and copyrights are property of their respective owners.