Mega Overload VR is a VR wave-based cosmic shooter with a multiplayer option available on HTC Vive. Throughout the game, you’re welcome to choose a safe playstyle or aggressively trade your lives to the weapons upgrades.

Mega Overload allows players from around the globe team up to play co-op multiplayer mode. A free demo for the game is available, it includes free play up to wave 5 in single player mode, and 5 replays for multiplayer. 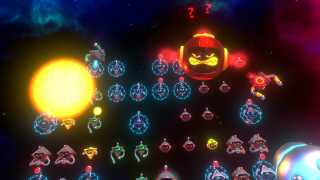 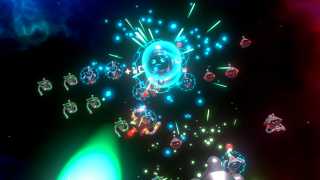 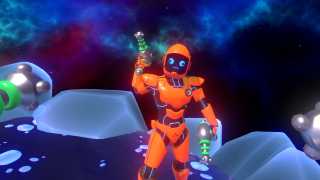 The Mega Overload Gameplay is simple. It is basically a retro arcade action where you’re asked to join up the lines on the Crystal Asteroid to defend a Milky Way from the enemies. You collect various power-ups, weapons, extra lives as you progress. You can get additional life every 25000 points.

You are moving through wave after wave, improving your skills and adding new features. Enemies won’t attack you until they get into special positions. A key point to doing well in the game is to shoot Bots, especially the strong ones, before they reach their positions.

The game is bright-coloured and so polished that we can only describe it as awesome. Kids especially will love it. The music and sound effects are really energetic and optimistic. They create an ultimate arcade feel. It feels good to use the guns not only because of their power but also because of the freaky the cosmic shapes. The latter being an obviously fortunate stylistic choice.

The game is a high-quality fun wave shooter, recreating the ”easy to learn but hard to master” characteristic of the classic arcade games. The fun is doubled when you join a co-op game.

As you progress, more than one playstyle comes up which you can adopt and use, from the defense to a more aggressive playstyle where you trade lives to upgrade your weapons so you can smash even more bots.

Mega Overload VR brings touch controller support. It is not an early access game which means everything works correctly, there are no extras to come aside from possible patching. Think of nice space shooters and put a nice VR spin on it — that is what Mega Overload is about.

The game is a fun retro arcade shooter where you’re armed with two blasters protecting the Universe from the invasion of Mega Bot army. The visuals and sounds are perfectly polished, which is great news. The game is especially recommended for those who miss the difficulties of the classic arcade games.

Download Mega Overload VR and learn how to blast away alien robots alone or together with friends..

Cons : Practice mode is too repetitive;
Can get pretty hard especially for beginners.

There's not a lot of questions about Mega Overload. Ask insistently in the comments so you can make it frequent!
Yup, take me to comments

Very interesting singleplayer mode.
You just can't miss this game!
One of the best action games ever!