DuckTales Remastered is a Metroidvania style game, an honest makeover of an old classics. It gives you a pleasure to go back to the golden ages of gaming, but now with refined detailed gameplay that is capable to please the most devoted Disney fans.

For anyone who grew up accompanied by the classic Disney cartoon, playing those remarkable Nintendo games, August 13, 2013,  the DuckTales Remastered released date, had become a long-awaited day.

It is easy to download DuckTales Remastered as it works on multiple gaming platforms: PlayStation 3, Xbox 360, iOS, Android, and Windows Phone. 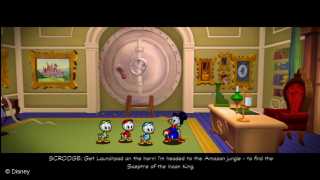 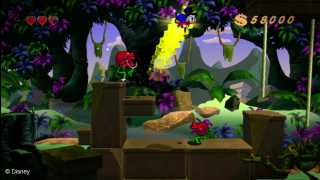 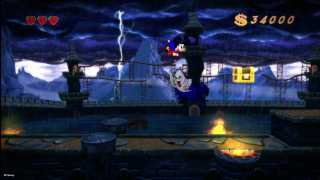 The gameplay stays pretty close to the original version. Those who enjoyed both playing DuckTales and watching the show on TV will appreciate the story and Disney atmosphere it brings. At the same time, here you’ll find new incredible additions like intro level and gallery.

As usual, Scrooge McDuck travels across the world in search of the treasures to increase his fortune. He can swing his cane to break objects and bounce on it to attack enemies.

This time developers focused more on a story and dialogues so they will constantly require your attention. That’s a really high point of the game. The story makes it truly fun, plus you can skip it if you want to.

The original DuckTales is about running and jumping light-heartedly, mostly for fun. It would be easy to breeze through if you knew exactly where to go and what’s your goal. In Remastered version, almost all of the levels require you to investigate every nook and cranny before you can immerse into it which feels weird at first.

The soundtrack brings some upbeat versions of the original tunes which are always so nice to listen to. The creators were lucky to get a 93-year-old Alan Young for voicing Scrooge. Besides, the game is wonderfully animated. The designers did an excellent job: the characters look like they’ve been teleported from the TV series.

All of the levels are mostly linear, however, there are some hidden hallways and rooms full of treasures just waiting to be found.

As you play through, you begin to feel the differences: modernization of the level layouts, and there is a simplification of the enemies that you’ll notice soon. The game progresses in a more linear, predictable and easy-going way than the original. It also helps to make the game more immersive and fun.

The controls are a lot easier. You are able to use the classic controls if you want (press down + pogo button).

Primarily, the controls are just as responsive if not more so than the original, which is good to tackle the old school platforming challenges. In fact, the pogo stick controls have been simplified: you only need to press the B button while jumping to initiate it.

Disney has made DuckTales Remastered app available for $9.99.The game is a premium with no in-apps and it is definitely worth the price alone. You pay only once, but after that, you’ll be able to enjoy the game to its fullest.

There are some classics that don't hold up today — and there are some that absolutely need to be experienced by gamers of all ages. Graphics and audio are remastered but maintain the same theme. Soundtracks really rock. What else do you need from the game to name it your favourite Disney remake?

Download DuckTales Remastered to get a pleasant trip down memory lane..

Cons : Level selection is not linear;
No way to speed dialogues along.

There's not a lot of questions about DuckTales: Remastered. Ask insistently in the comments so you can make it frequent!
Yup, take me to comments