Chompy Chomp Chomp is a multiplayer, labyrinth-based game where the charming Chompies chase each other eating the colour out of their targets. The colour of the Chompy that is preferable for eating is right beneath you. Chomping someone can give you points, but points could be taken away from you if your character gets chomped. The target colours change frequently, and one minute you’re a hunter, and the next you have to eat someone yourself. If you win, you’re placed on the triumphal stage.

Downloading Chompy Chomp Chomp is easy For Windows XP/Vista. It is also available now on XBOX 360, through the indie games section of XBOX Live. 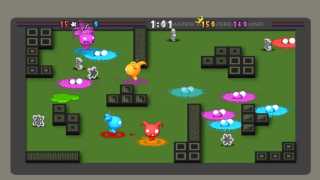 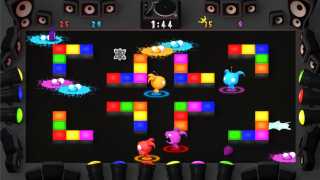 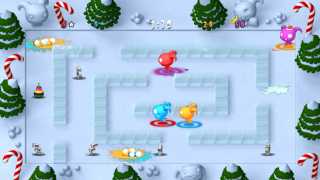 Chompy Chomp Chomp gameplay is fun and easy. If a chompy has your target, they can chomp you, so running away is the best option. The target colours change, so you have to attentive to spot them quickly.  If you don’t understand something, you can go to the e-manual any time you want.

Before starting the game, you choose your Chomp. You can change the appearance of your Chomp, make it blue or red. You also have to choose the environment where you’re going to play. It can be disco, art, beach, winter or warehouse.

The outer target turns spiky if you have a power-up. There is an inner circle when you’re chasing another player.

The game supports PC exclusive modes: single player and co-op. What’s also great about Chompy Chomp Chomp is that you can select another difficulty level if you can’t nail it the running one.

Chompy Chomp Chomp just oozes style that fits the theme of the game, chasing chompers and running inside the maze. The style is cohesive and unique, which is aesthetically pleasing at first sight. However, after long hours of playing you can go dizzy looking at the monitor.

Chompers are drawn as teeny-weeny, cute creatures with cardboard hats on their fabulous heads. The music is fun and entertaining, even childish, occasionally turning into disco. It is a bit loud, better turn it down.

The game is becoming boring really soon, especially for a single player. After passing the first level, they give extra time and spawn more Chomps, and it goes on and on until you’re sick and tired.

Chompy Chomp Chomp support controllers and that is great. It gives an informative manual at the beginning so you can look through and catch the important moments. Controls are extremely easy to use. There are power-ups that are activated when you press your action button. There are also special power-ups that activate as you eat them. Everything is thought out perfectly.

There is nothing odd using a controller —  you can move using the directions, the action button on each controller activates power-ups and menus.

Luckily, there are no coins, points, diamonds, and other examples of the in-game currency which can be redeemed. The cost of the game is $1.99/ You buy once and there you go.

Chompy Chomp Chomp is a fun maze multiplayer made by The Utopian World of Sandwiches. Its graphics fits the theme pretty well. It is fun to play with friends but seems a bit boring for a single player.

Download Chompy Chomp Chomp and get a unique experience of being a little critter eating stuff with big-bad critters chasing you on your way..

Cons : The maps are not that large;
The same melody which is annoying;
Only two game modes.

There's not a lot of questions about Chompy Chomp Chomp. Ask insistently in the comments so you can make it frequent!
Yup, take me to comments

One of the most trending games right now!
Everyone enjoy playing this game
One of the best action games ever!